Kryptgarden Forest is a hilly wood located within the Sword Coast region of the Forgotten Realms and north of the city of Waterdeep. The wood is bounded by the Sword Mountainsto the north and the village of Westbridge to the east. The deeper one ventures into Kryptgarden Forest, the thicker and closer together the trees grow and soon a fog hangs in the air, tinged with the acrid smell of poison. Inhabitants • The forest is known to be the haunt of the ancient green dragon Claugiyliamatar, known as Old Gnawbones for her habit of flying with a corpse in her jaws. • The forest is also the home of the Zartruss hobgoblin clan, which has long served Claugiyliamatar, at times acting as her emissaries. The Zartruss hobgoblins are especially good archers. Their leader is the hobgoblin captain Garbul. • Villagers have tales of the dark fey lord, calling him King Witchthorn. Appearances: Kryptgarden Forest is the location of DDEP1 Corruption in Kryptgarden, the first adventure of the Tyranny of Dragons story arc. 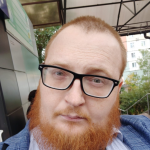